These prints from Adelaide design firm Cul-de-sac seem to be getting a lot of attention from various design and decorating blogs. Rightly so as well, beautifully designed in all their minimal goodness, they would make a fine addition to any studio wall or design savvy lounge room. Check out Cul-de-sac’s website as well, not only will you discover some very fine work indeed, it’s probably the best application of the Cargo Collective website template I have come across. 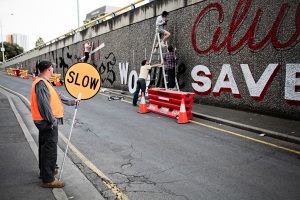 I’m really loving this typographic mural on the Morphett Street Bridge in Adelaide produced by local artists Chris Edser ,Tristan Kerr, Ankles  and USA artist Above. The project was organised by Josh Fanning of Maga Zine Gallery, together with  ArtsSA and the Adelaide City Council who brought Above to Adelaide to mentor the project. From Chris’ site: ‘The challenges included a rough stone encrusted surface to work on, the sheer size of the piece and Above actually breaking a bone early in the project. Our message reflects these challenges and the mural also happens to be the site of the first ever school in Adelaide and opposite a  church, so the positive message of words saving could be interpreted positively in many ways relative to the site and personal opinions of the viewer’. My favourite part is probably the ‘Sticks’ typography, constructed from different bits and pieces. Hopefully we’ll see more of this type of project brightening up the nooks and crannies of Adelaide. You can see a video of the whole wall here. 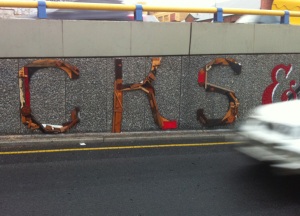 Adelaide hasn’t exactly been too kind to any quality independent magazines that try to survive in the current market, so props where they are due to the publishers of local pundit ‘Collect’ which is now onto its third issue.. Billing itself as ‘the magazine about taking pride in what we do and where we live,’ it’s a sentiment worth encouraging (wherever you live) but in Adelaide especially, more than often the seen as the poor cousin of the eastern state capitals (at best) and the butt of many an aspiring comics routine. The magazine places itself very much in the  ‘local community as the way of the future’ camp – it sees the future as being ‘smaller’ and more community orientated (at least it hopes so) – so it’s appeal is largely pointed to, how you might say, the ‘hipsterish’ amongst us, which is in no way meant to be derogatory. It’s a pleasant contrast to say, what you might find amongst the pages of million dollar homes and Private school socials of your latest issue of SALife for example but expect to see lots of beardy guys, riding bicycles and starting art galleries, just saying.

As far as the physical package of the mag, it’s nicely put together, beautifully printed by Express Colour at Torrensville and thoughtfully designed under the direction of Xtra Shiny kingpin Adam Johnson. Its A5 size gives it a reassuring ‘hip pocket’ journal feel to it and the pages are comfortably filled with story content, the small page size being offset by plenty of white space. Photography and illustration of a high standard are scattered throughout, this is obviously a magazine that has been put together with love and thought, it’s the type of publication you want to keep and flip through again. The overall cleanness of the design is obviously helped by the mag containing no advertising which contributes to the ‘journal’ feel I mentioned earlier, I just hope it’s a sustaibable business plan.

At $5 an issue, you get a lot of magazine for your money (the issue runs at 62 pages), only available at select Adelaide outlets (and in Victoria and NSW through MagNation outlets) it’s worthwhile searching it out if you’re looking for a different type of read.