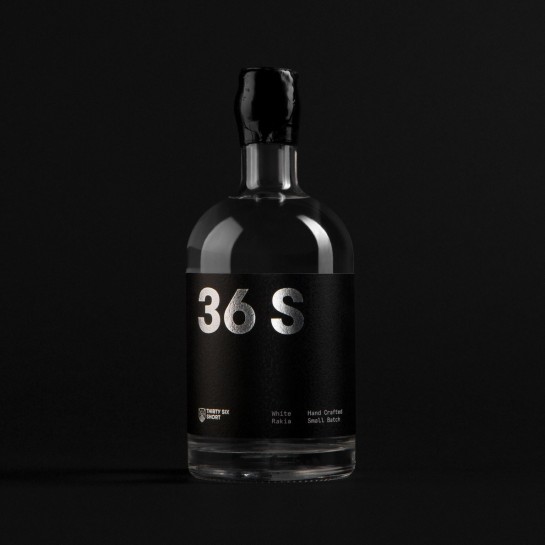 I’m loving the understated beauty of this design for 36 Short, which is a type of Balkan spirit called Rakia. It is designed by the guys at Studio Band and I spoke to Creative Director Chris Cooper, about what went into the creation of the label design:

“We were approached by two brothers, Jon and Con Lioulios. The brothers were extremely passionate about taking their late fathers Rakia recipe, that had been passed down through their family for generations, from a tiny non commercial still operating in their shed to a brand and product that introduced the widely unknown spirit to the rapidly growing boutique, small batch spirits industry. After several weeks of research we wanted to develop a brand that removed itself from tradition and convention to allow the product to become more palatable and engaging to a relatively broad audience. Being that 36 Short was somewhat of a contemporary take on an age old recipe we felt it was extremely important to create a brand that reflected that, we wanted to avoid the trap of creating a brand that looked like it was designed for a different era, it needed to be honest. 36 Short is currently being launched to the public with huge interest, not only locally but also nationally and it is quickly becoming a stand out product within a highly competitive market.

So mission accomplished! And for all you type nerds out there, the sans font used is
Walsheim Bold from Grilli Type and the monotype font on the front and back label is Apercu Mono from Colophon, both excellent type foundaries. Studio Band are about to launch an update to their website, so keep an eye out for that in the not too distant future (in the meantime, there’s already some great work to look at on their current site). And if you want more information on 36 Short itself, there will me an extensive post on the product and producers on The Source, Adelaide food and wine website in the next day or so.